Being John Malkovich: Reincarnation and Identity by Gnostic point of view 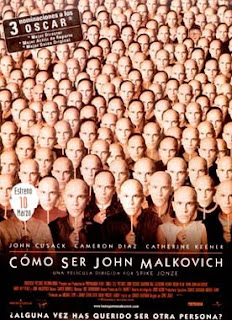 A strange film, bizarre and weird. From an argument absolutely nonsense (A man gets a new job. There is a door, hidden, leading to the mind of actor John Malkovich, where you can stay for 15 minutes before being spat out on the road. Impressed with the discovery rent addresses the transition to other people, including our own John Malkovich), the film raises profound symbolism around the Identity and Reincarnation.
Unlike most Western religions, the ultimate goal of Gnosticism is not found in life after death. Gnostics sought to become “living Christs”, ie seek to overcome ignorance and death. In this state, the mysteries of creation and not only would manifest, time and space would dissolve before the conscience, and all the illusions of reality would collapse. As we can see in these two passages in the apocryphal gospels of Philip and Thomas,

“If you saw Christ, Christ became
This
person is no longer a Christian, but Christ himself
If someone can win the
resurrection will never die “
(Gospel of Philip)
“Jesus said: Whoever drinks from my mouth
will become as I, myself am going to be that person,
and the hidden things
will be revealed to him “
(Gospel of Thomas)

Gnosticism sees in reincarnation a perverse strategy of the Demiurge (Yaldabaoth, the false god, creator of the material cosmos, intoxicated by power, believed to be the only reigning deity in the universe) to keep us in this world into oblivion. Condemned to start again from scratch, do not add knowledge, forgotten by subtraction.
For many Gnostics, the failure to achieve this symbolically meant being trapped in the endless round of cosmic dragon eating its own tail, Ouroboros (see figure below).

“But what is apparent is that Gnosticism despises reincarnation, as well as eternal damnation or extinção.A obvious reason is to be trapped inside the Ouroboros means the venom of the continuous neglect and ignorance, liberating antidote to the opposite of Gnosticism. A life or a thousand is so useless, unless a person can light the spark of God and become like Christ. Despite the image of the Gnostics smísticos be to ease, the truth is that Gnosticism has an underlying sense of urgency, as the reincarnation, is also absent from most Western religions. “(CONNER, Michael.” Gnostics Do Believe in Reincarnation ? In: Aeon Byte, available in
http://aeonbyte.blogspot.com/2010/03/examiner-article-do-gnostics-believe-in.html) 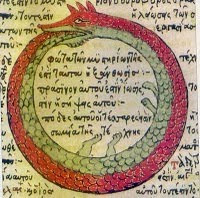 Reincarnation is forgotten, the conviction to start again from scratch. That would mean the loss of identity. A film that masterfully makes a parable of this issue is the enigmatic and surreal film Being John Malkovich

The puppet is the main symbol of this film. Besides the obvious symbolism in the narrative present (Craig – John Cusack – uses his ability to manipulate identities puppeteer and puppet as parallel to the condition manipulated John Malkovich), there is a deeper meaning: the puppets are direct descendants of the ancient idols divine, loved and excited by their priests.
Victoria Nelson in The Secret Life of Puppets demonstrated how the popular culture of the twentieth century we have an increasing fascination with robots and dolls with the emergence of the concept puppet master (human or divine) inserted into a Gnostic cosmology of the relationship between man – automaton and man / god. This fascination with robots or puppets in this Gnostic scheme symbolize the way in which we can assess their own human experience, that is how we see ourselves as prisoners in a hostile cosmos. Moreover, the puppets metamorphosed, in modernity, in figures such as robots, cyborgs, androids and, more recently, in the hybridization of the human body. Only now, with a further ingredient: the creation of a mediation to which the human consciousness to download and transcends the prison of flesh. The human desire to migrate to mediation ideally shaped.
The film symbolizes the longing for mediation at various times. We can see this in two dialogues. After having sex with Maxine Malkovich learned that Lotte was in his head, provocatively comments to Craig:

Craig: Do you torture me on purpose?
Maxine: I fell in love.
Craig: I think not. I fell in love, and people
are so passionate.
Maxine: He picked the unrequited variety. This is bad for
your skin!
Craig: You’re bad Maxine!
Maxine: You know what it’s like two
people looking at you with total lust and devotion through the same pair of
eyes?

People in love for each other, but need to consolidate mediation relationships. A kind of platonic sex where the object of passion is seen through the eyes ideals, raising exhibitionistic impulses in Maxine. Or the desire for mediation stems from the denial of the current physical condition:

Reincarnation and Mediation
This discussion turns to the theme of identity, linked also to the issue of mediation and Reincarnation: be through the other (person, puppets etc..). And also the revolt and the desire to break free of the strings that control the identity: who manipulates, who is actually inside of you controlling it?
The first sequence of the film summarizes the two dimensions of the theme of identity. See Craig manipulating a puppet and doing what he calls the “Dance of Despair and Disillusionment.” Craig manipulates the puppet as an intermediary for himself, as he says at one point the film (the voice of a puppet): “Craig, why do you love puppeteering” asks Maxine. “Maxine, I’m not sure. Perhaps the idea of being someone else for a while. Being in another skin, think and move differently, feel differently, “says Craig’s puppet. At the same time, the doll looks up, finds nothing but a puppet, rebels and begins to break the fourth miniature small stage in the workshop of Craig. The puppet rebels with their condition and want to get rid of the handler. Is the condition of John Malkovich later in the story.
What we have here is the theme of identity crisis in the contemporary world. Craig is a puppeteer who, although talented, is unemployed. His wife Lotte says he should get a small job. “Who wants to hire a puppeteer in winter as the economy today.”
Craig is a talented puppeteer the archivist at Lestercorp (for having fast hands), and after work, explores the “beak” to make money from the portal leading to the head of John Malkovich. But in these three situations, there is one thing that unites them: the search for a mediation that makes you transcend your life frustrated and melancholy at the beginning, the puppets and in the end, the head of John Malkovich.
In the first case, the transfer is symbolic, the second is literal: transfer your consciousness for mediation. The narrative links this shift to a religious aspect or mystical reincarnation.
All the central characters of the film, and customers JM Inc., want to live 15 minutes the head of John Malkovich. They seek to move to mediation as a way to transcend their miserable existences. It is a parable of the spirit of the end of the century, where new technologies will offer through virtual avatars, profiles created in blogs, orkuts, twitters, etc.. the possibility of living other or multiple identities. In the film the characters realize that is a false gnosis.
Instead, the group of Dr. Lester for the true gnosis. It aims to achieve eternal life preaching a “small” blow to the Demiurge: circumvent the law of reincarnation. Gnostic mythology sees the reincarnation of an evil Demiurge strategy to keep us in this world into oblivion. Condemned to start again from scratch, do not add knowledge, forgotten by subtraction. The group achieves immortality Lester no longer reincarnate, but transferring the consciousness to a “body container” in its more mature phase in terms of awareness and mental training. They have until midnight on the day designated for transfer to, because otherwise, “would be absorbed, trapped, caged in the brain of the host, unable to control anything, doomed to see the world through the eyes of another person” , as stated by Dr. Lester. That is, the arrest of Reincarnation, as it denounced by Gnosticism. While Craig, Maxine and Lotte want to move to mediation by a desire to see the world through the eyes of others, the group of Lester wants more than that, keeping intact the core of consciousness, jumping from one body to another achieving immortality and maintaining identity.
Credits: