Carthography and Topography of Mind: From “Vanilla Sky” to Tim Burton’s “Alice in Wonderland” 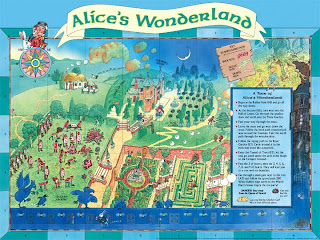 A set of films of this new century is going to “Vanilla Sky” to the recent version of Tim Burton for “Alice in Wonderland” shows that current cinema reflects a new techno-scientific agenda: psychocartographies and psychotopography. The mobilization of the neurosciences and cognitive sciences for Mapping the mind and consciousness. Mapping of imaginary worlds is not a novelty in the history of culture. But in actuality, these tropes have a more practical purpose: control and social engineering.

What does the movies “Vanilla Sky” (2001), “Eternal Sunshine of a Spotless Mind “(2004),” The Good Night” (2007) “Science of Sleep (La Sceince Des Rêves, 2006),” Alice in Wonderland (2010) Tim Burton’s, “Inception” (2010) and the series TV “The Prisoner” (2009) have in common? The latest discussions presented in this blog about this whole film seems to point to two Gnostic tendencies of the film in the beginning of new century:
First, the end of the model of Gnosticism pop that marked the end of the century past in films like The Matrix and The Truman Show: the protagonist prisoner in a reality that is actually a counterfeit technology, a world manufactured, virtual. It’s the classic tale of a Gnostic world created by a Demiurge (the technology) to trap human beings. We see an explicit and dramatic confrontation of the divinity of man against a power-crazed spiritual and technological. In the beginning of new century, the Gnostic narrative (Fall, imprisonment and redemption) is brought into the protagonist: the I demand a true hidden trapped or lost by forgetfulness, in a parallel world dream or limitations that prevent the self-knowledge.
Second, all these movies seem to undertake a mapping, a mapping and topography of the mental world. A real allegory of geography mental processes (dreams, daydreams, thoughts, emotions, etc.).. For example, seen in Vanilla Sky, near the end of the movie, the revelation that the David Aymes protagonist lives in a “lucid dream” created from a mapping of affective and emotional references made within the repertoire His imagery: favorite movies, music, rock bands and fragments many of pop culture. The “lucid dreaming” as the protagonist would be a sentimental journey through his memories.
In “The Prisoner” a true mapping the collective mind of people that need to be “fixed” through a radical technique neuroscience: the Ego to carry a parallel reality consensual (“The Village “). All have a double life: while their “egos” conscious inhabit real world, while its “egoss” unconscious living everyday life bucolic village. Thus their “egos” unconscious are “fixed” in The Village through a values agenda “positive” carried out by the leader of city.
In the movie “Inception”, we have developed a topography of mental geography: different levels of dreams overlap, each with its own time zone separate, producing an architecture similar to a hypertext narrative or a computer game with several levels as steps.
This trend observed in recent Gnostics films seems to reflect the a techno-scientific agenda of this new century: the agenda tecnognóstica the multidisciplinary effort involving the neurosciences and cognitive sciences to unravel one of the last great mysteries of science: the functioning of human mind and the nature of consciousness. At the end of last century, the film reflected Gnostic, critically, the rise of notions of cyberspace, virtual reality and simulated worlds by through computational models, design tecnognóstico Today is another: Looking for a simulation, a computational model, a graphical interface that allows not only to understand the dynamics of mental processes and consciousness, but mainly, manipulate it and control it.
Where is the “soul”?
If the philosopher Descartes in the seventeenth century, formulated this question (epigraph that opens the film “Souls for Sale,” a film that critically thematizes tecnognóstica this agenda – see links below), now the search for the answer to that question (the “soul” is replaced by the word “consciousness”) is taken to its ultimate consequences if the endeavor to produce a true or a psychocartographies psychotopography. 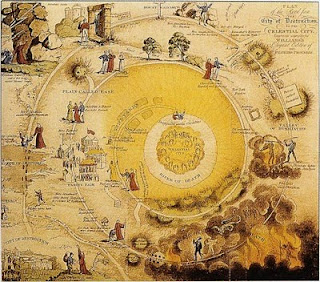 Maps, mapping and topography of imaginary lands are not new in the history of culture. Maps as “ThePilgrim’s Progress” or “Map of the Various Paths of Life” (see figures on the side – click on them to enlarge them) of the nineteenth century are allegories of symbolic events, metaphysical, as the trials of faith of a pilgrim or paths of life from birth to death. These strange looking old maps serve as personal guides to help rationalize and understand the psychological and religious phenomena. Can be considered the forerunners of a techno project initiated by the rationalism of Descartes and that in actuality, blossoms with computer technologies. The book “Alice in Wonderland” by Lewis Carroll can be considered an example of the zeitgeist of the nineteenth century where the development of maps of imaginary countries wanted to make an allegory about the real. As in Plato’s allegory of the cave (the world as a simulacrum of the perfect ways of the world of Ideas), Carroll will create the allegory of “Wonderland” to search for the origins of metaphysical simulacrum of reality. The real-life Alice in England would be nothing more than a copy of distorted or impoverished Wonderland. In this imaginary land the paradoxes, ironies, absurdities and nonsense would be more explicit than in the real world where the ultimate nature is hidden or distorted by rationalism.
In the Alice in Tim Burton have a new kind of allegory, tecnognóstica: Alice crosses the territory of a Wonderland that is no longer the allegory of Carroll. The path is made by Alice through a mental map for self-knowledge, the pursuit of real Alice and not a metaphysical reflection of reality. His interest is instrumental: self-knowledge and motivation to take his father’s business and be a courageous entrepreneur.
The Wonderland Tim Burton is a reflection of this agenda tecnognóstica: creating mappings, models and interfaces to visualize the mental processes as a geography of the mind. Each region (the ante-room entrance to Wonderland, the Red Queen’s castle, the mountains surrounding it, the queen’s castle located on a plain white, the giant chess board at the sea where the final battle is done so on. ) is an allegory of mental processes, psychological and cognitive.
For example, the monster has Jaberwocky his severed head on top of a ruined palace on the edge of the sea. It’s like Alice from deleting their fears, ghosts and restrictions that prevent it from being the real Alice. It is the yearning of all the technologies of the mind (self-help, motivational techniques) to eliminate the constraints that prevent the development potential of I. If Freud wanted to understand the symbols, with the Allegories is easier: cut up their heads!
Wonderland is no longer an underground kingdom as envisioned by Carroll. Now are memories. Memories that need to be mapped, charted, so that we can locate the regions inhabited by the memories “bad” areas (Trevose, swamps, palaces in ruins – unfinished works that have turned rubbish – meanders in landlocked mountainous areas etc.). Not to understand them, but to delete them, like in the movie “Eternal Sunshine …” where from a graphical scans of the brain, could track the bad memories that should be deleted to make customers more light, assertive, without guilt or indecision that hinder the goals of the Self
The Map of “The Prisoner”
In the television series “The Prisoner” (The Prisoner, 2009), remake the U.S. channel AMC Cult of the British series of the ’60s, we have the flagship creation of an interactive map of the “Village”. Results of a technology of social control (“Social Engeneering”) undertaken by the company Summakor, “The Village” is another one of these imaginary places, a mapping of mental life made to “fix broken people.” Upon induction by heavy drugs, the Village is building a “consensual hallucination” (defined as the writer William Gibson gave to cyberspace) where they are sent to the Selfs of people with dysfunctional social order (paranoid, angry, depressed etc. ..) There they live in a village in pastels in a routine idyllic, simple and innocent. 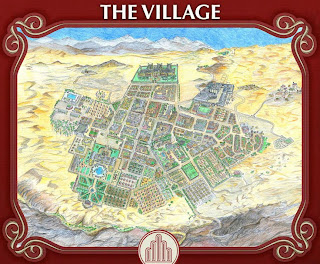 One product of this series is an interactive map on the site of the station where AMC can make a visit to various institutions and neighborhoods in the Village (and prohibited areas virtuous). Mapping ironic mind of the characters in the series, but, basically, is a reflection of contemporary techno-scientific agenda (click here to visit the map).

“There are maps´to anywhere: chromosomes, galaxies, the brain, the cell, the spaces between atoms, cracks in the double helix, the edges of time. If maps invitations travels, these new maps inspire journeys of an altogether different, more associative sort. At the same time, they still connect to our traditional geographies, and are potential destinations of the orientating process; They lend themselves to a form of bushwhacking that is more interior, philosophic, imaginative” ” (HALL, Stephen. “I, Mercator, IN: HARMON, Catherine. You Are Here: Personal Geographies and Other Maps of the Imagination. New York: Princeton Architectural Press, 2004, p. 17.)

As allegory, the maps have that capability Neoplatonic or Gnostic philosophy of a journey or imaginary, by taking the reality backwards, as it did in the lands of Lewis Carroll’s Wonderland. But the project tecnognóstico is much more practical and instrumental: to make the map match the territory, be a guide to procedures, a control panel as icons on a desktop. When we click them control mental processes, psychological and cognitive. In the end, a techno project control, management, engineering, social and psychological.
Related Posts: