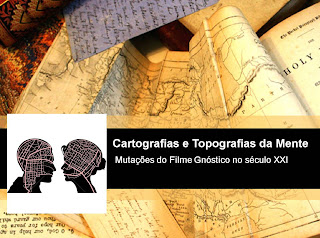 Above a summary of the presentation of initial findings and first hypotheses of the research “Cartography and Topography of Mind” in the VI Scientific Meeting and Scientific Initiation of the Universidade Anhembi Morumbi held last Friday. If cinema is the social imaginary of a particular society and a certain time, the film reflects current a techno-scientific agenda marked by the impact of Neurosciences and Cognitive Sciences. This agenda technoscientific pervades the Internet today with binge people, spontaneously, want to record their experiences in private through “lifestreams”, life-trackings, ” inner geographies” and a whole range of cartography of mental life.

Those who follow the evolution of thematic Blog posts “Secret Cinema: Cinegnose,” realizes that in several reviews of movies, we identified the recurrence of arguments, ideas and stories that reflect what we call techgnostic agenda. It is a characteristic of the Gnostics of early films new century. Movies like Vanilla Sky, Eternal Sunshine of the Spotless Mind, Stay, The Good Night, Science of Sleep, Inception, Dead Souls andTim Burton’s Alice in Wonderland are real dives in the protagonist’s inner world (dreams, memories, daydreams, but not only in a metaphorical or allegorical sense (as in the movie “Being John Malkovich”), but instrumental.
It is as if to a mapping or cartographic representations of the mind to achieve a specific purpose: get rid of barriers, constraints or trauma for a person to be more assertive, morally blameless and light, releasing the latent potential and become a professional or successful person.
Gnosis is translated here as self-knowledge. Transcendence is no longer cosmic environment within the narrative of classical Gnosticism (transcend an artificial universe created by a demiurge god that imprisons man), but now as an introspective journey.
If every film is a document because it represents the imagination of a particular society or historical period, this set of films mentioned above seems to strongly reflect current technological agenda marked by the neurosciences, cognitive science and memetics and its byproducts like neuromarketing and a whole literature around self-help and self-knowledge.
Explaining this agenda technoscientific (techgnostic) appears, at first, the motivation that drives the mystical computer technology: the quest for artificial intelligence from the solution of the mystery of the nature of consciousness, mind and soul. It is this motivation that drives the transcendentalist elimination from the body (via implants) and virtualization of subjectivity:

“The new creations (biotechnology, cloning, nanotechnology, virtual reality technology itself or computational) point to overcome the limits of organic. Victor Ferkiss will characterize this new perspective with a seemingly paradoxical concept: “Gnosticism technology.” Gnosticism history was characterized by a horror of organic and natural aversion. Such elements would be enemies of the spirit in his quest for enlightenment. However, the current techno approaches that philosophy to propose to overcome the basic parameters of the human condition: finitude, contingency, mortality, corporeality, animality and existential restriction. Ferkiss, like Martins, link to this amazing cross between the aspirations and contemporary technological utopias of Gnostic transcendence. “(Ferreira, Wilson Roberto V. Cinegnose. São Paulo: Giz Editorial, 2010, p. 25).

The late twentieth century was marked by the first phase of this technological Gnosticism: the possibility of creating virtual worlds. Virtualization of subjectivity would be through the mediation of avatars or graphical interfaces that would create the illusion of similar experiences to the physical world. The virtual reality helmets, gloves and digitlização date of bodily sensations in this project were of “immersion” of the self in a virtual world. Movies like The Matrix and The Truman Show critically reflected this imaginary tecnognóstico the time: the protagonists trapped in worlds without defining the difference between the simulation and reality.
Earlier this century we have the second stage of this agenda tecnognóstica: the search for the latest interface technology history, the connection between biological and electronic, between neural networks and computer networks. If the design of the Internet architecture was based on the neuronal architecture of the mind (decentralized, fractal, etc..), The fate of digital technologies would be to seek the most perfect model simulation of the dynamic functioning of the mind and consciousness, so perfect that map coincide with the territory and simulation to replace the organic basis of consciousness itself.
Movies like “Vanilla Sky” and “Eternal Sunshine of the Spotless Mind” as theme critically this possibility by showing that behind this aspiration tecnognóstica hide handlers commercial projects. On the other hand, films like “The Source” and “Alice in Wonderland” Tim Burton make the apology that agenda.
Mind’s Cartography and Topography

We live today in a frenzy for mapping or cartographic representations of our thoughts, habits, relationships, choices through social networks, software and personal projects that seek to develop true “inner geographies.” There is a deliberate effort and encourage all users to spontaneously make available your personal data or present, on their own, their personal geographies and maps metals. We have a number of examples: 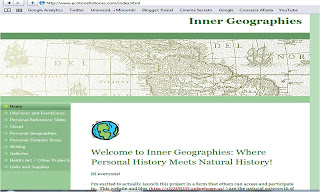 1 – Inner Geographies Project, carried out pelog geographer and professor at Sonoma State University in the U.S. Heidi K. Lamoreaux. Divided in several cores, the project aims to bring the 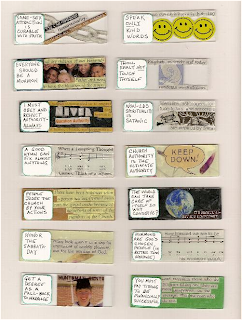 methodologies in the exploration of natural science “of what happens in our inner life: mind, body, our perceptions of place and our imaginary worlds. A true mapping of the memories of our emotional experiences and affective (isolated in “strip” as those used in microscopes) and maps with the sequence of events in our lives as plans that overlap like the rings of a tree trunk in the longitudinal section giving a topographical view of the line of personal life. Or the “Childhood Maps”, maps created by children representing his “cosmological position, exposing the connections between physical places and the” internal terrain “(see photos opposite and below). The result is a series of maps and personal topographies. A project that not only reflects the current techno-scientific agenda but which produces organized data that easily can become a raw material for future software-based mind maps. 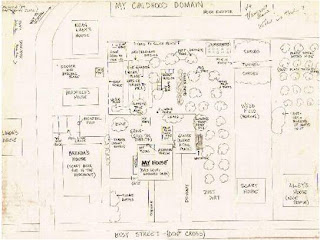 2 – “Mirror Worlds” or “lifestream” – David Gelertner seminal idea, Professor of Computer Science at Yale University. In the mid-90s said: “Will you look at a computer screen and will see the reality,” he predicted. “A part of any of their world – the city where you live, the company where he works, his school, the municipal hospital – will appear there on a crisp, colorful, abstract but recognizable, moving subtly in a thousand places . Gelernter At the time he thought of a software, lifestreams, which would replace the desktop computer: a program storage in chronological order from documents to their digital experiences. That did not happen, but today, something similar can be found throughout the web in different formats: blogs (true electronic journals), news updates as the personal Facebooks and other social networks. This clearly allows a sociogram or a flowchart of social and personal relationships, as well as a permanent mapping of habits and attitudes, such as the BBC news report that Facebook’s data shows that over the periods ending courtship (click here to read the news ).

3 – Life-Tracking – recent trend where students participate in a meticulous record of everything they do by hand, PCs or smartphones: take as many cafes, books they are reading, daily working hours etc.. Some people still use sensors to map out their vital signs to see, for example, as are sleeping. Gary Wolf, a technology writer and co-founder of Web site The Quantified Self (“The Quantified Self”) is part of a group of people who want to use technology to help them identify factors that make them depressed, prevent sleep, or even that affect cognitive performance. According to an article in The Economist (translated by CartaCapital of 12.01.2010 “His particular Matrix”) is already an emerging market for devices autotracking.

This “quantification of I” has a clear technological cabalistic aspect of Gnosticism. As we saw in previous posts (see links below) Kabbalistic Gnosticism has a transcendentalist discourse radical elimination from the body and virtualization of subjectivity, that is, to eliminate by imposing sacred codes (digital) the physical constraints of the spirit (contingency, finitude, corporeality, animality, etc..) so I was deep in cyberspace, digital heavenly New Jerusalem, and reach their fullest.
It is the motivation behind each row of books, self-help and self-knowledge: a life without guilt, more assertive, without trauma or memories that cause conflict and indecision. Delete, deny, rather than understand and overcome.