Conspiracies, Schizophrenia, Synchromysticism … Some Hypotheses to Explain the Gnostic Film 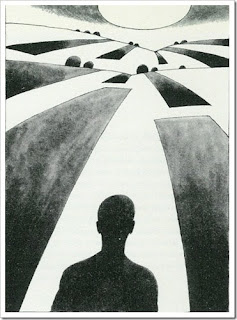 Anywhere where I expose my research on the film Gnostic insistent question arises: Hollywood is turning to Gnosticism? Screenwriters, directors and producers gnostics are invading the American film industry? Then everything could be a big conspiracy? The answers are not so simplistic. Even more, we know that the “revival” today is just another throughout history (the alchemists in the Middle Ages, the Neo-Platonism in the Renaissance, Gothic and Romantic literature in the eighteenth century etc.).

To help answer these questions, we will try to do a mapping of the main hypotheses about why the current convergence between movies and Gnosticism:

1 – Conspiracy Theory: This event thrives mainly on the Internet. Gnosticism is associated with a movement called “Satanism” or “Luciferianism” who was behind the globalization or the “New World Order” (NWO). The main goal of globalization is not political and not economic. This was all just a means to achieve the larger goal: the proliferation of neo-paganism with the destruction of the three great monotheistic religions: Christianity, Judaism and Islam. Because the Gnosticsmo face the monotheistic God as a Demiurge Gnosticism and oppose forms of religious revelation (as opposed to faith in God, Gnosticism proposed faith in yourself) are evidence of its purposes Satanists. In this struggle for hearts and minds would be in the vanguard of this Hollywood giant conspiracy to submit on movie screens worldwide protagonists who seek more faith in themselves than in God. Writers, Directors and Producers would be part of this conspiracy that would aim to build the road within the philosophical and mystical which covers the New World Order. This hypothesis is primarily evangelical and fundamentalist Christian groups in the U.S., the same groups that defend the civilian weapons as a way for people to organize militias to counter the NWO.

If this hypothesis first part of a mistaken understanding of Gnosticism (secret societies, neo-paganism, cosmos without God, nihilism, atheism, etc.) on the other, it seems that movies Gnostics take some advantage of these delusional conspiracies: embedded in their narratives References of these urban legends as in Eternal Sunshine of the Spotless Mind when Joel (Jim Carey) is an impulse to take the train to Montauk and missing work. Why Montauk? It is a subtle reference to the famous conspiracy theory of the Montauk Project, whose content has to do with the very theme of the movie. The Montauk Project was a secret project undertaken by U.S. military intelligence experience with psychological intervention through drugs and electronic equipment for espionage and interrogation.

2 – Sincromisticismo: hypothesis proposed by Jason Horsley (philosopher and critic of American cinema), especially in his book “Secret Life of Movies: Schizophrenic and Shamanic Journeys in American Cinema. London: McFarland, 2009. “ For him, cinema is the way people experience it the other three areas of experience that society alienates us: the search for religious purposes or “signs”, the shamanic or animistic way of dealing with the Nature and schizophrenic inability to distinguish between reality and fantasy. Both the experience of producing a film or watch it already is schizophrenic, on the assumption that the social structure itself is already schizoid, although not so admit. The recurring themes of the films Gnostics (loss of memory, identity, the boundaries between reality and fantasy, sanity and delusion, paranoia, etc.) would be symptoms of a condition that the company concealed and movies would be one way to experience them. By offering a “shamanic reality” (be in two places at once), the film would become the most schizoid of all media. In other words, to communicate with a schizophrenic society, writers and directors need to resort to a language also schizoid. What we think, then, the 3D movie experience?

The paranoia and schizophrenia, the raw material of films not only Gnostics (as, for example, “Fight Club”, “Memento” and the recent “Shutter Island”), but the actual Gnosticism (the representation of the human condition such as an exile in a hostile cosmos) would be the very way to communicate with a company also schizoid. Horsley does not deal with schizophrenia as a disease that needs to be treated in the psychiatric sense. The Sincromisticismo asserts that the search itself by religious revelation is schizophrenic and that the company, denying that his own nature and confine the schizophrenic experience in psychiatry, denies people the experience “shamanic” the sacred. Therefore, the films would not be the means by which people want to escape reality through myth, but to experience it even though the company denies.

3 – The Gnostic film as a reflection of a historical moment – the hypothesis of the ideas of French historian Marc Ferro. For him every film is a document because it would represent the imaginary of a given society or historical period:

“The imagery is both history and history, but the cinema, especially fiction films, opens a great way toward the fields of psychosocial history ever achieved by the analysis of the documents” (FERRO, Marc. História.São Film and Paul: Peace and Terra, 1992, p.12).

No matter if the film refers to an immediate or remote past, since it always goes beyond its content. So if there is a connection between cinema and society, that is, if the film can be considered a repository of contemporary social thought and now know that this imagery is strongly marked by a technological development driven by techno-utopian nature of Gnostic, perhaps can understand why the recurrence of elements of gnosticism in the cinema. Strongly connected with the social imaginary of the end and beginning of new century, the film industry today, particularly the U.S., reflects not only the technological vision transcendentalist (Tecnognosticismo) and also existential issues, ethical and spiritual imagery resulting from such .

4 – Gnosticism as attitude and “psychological ambience.” This hypothesis can be summarized in the phrase of Stephan Hoeller (writer, researcher, scholar and religious leader): “Every good artist is half gnostic.” For him, the constant rebirth of Gnosticism throughout modern history (Gothic and Romantic literature in the eighteenth and nineteenth centuries, modern and avant-garde art, in actuality, the Hollywood cinema) runs under the systematization and transmission of the Gnostic philosophy. Rather, Gnosticism historically been characterized by syncretism, obscure origins and transmission trouble for the disappearance of key documents and texts. For Hoeller, the strength of Gnosticism refers to:

“A certain attitude of mind, a psychological ambience (…) a certain kind of soul is by its very nature, Gnostic. Whatever their geographical environment, cultural or spiritual this inevitably gravitates to a Gnostic worldview. When that ideological bias is the stimulus of some element of transmission Gnostic, is bound to emerge a rebirth. “(HOELLER, Stephen. Gnosticism: occult tradition. RJ: New Age, 2005, p. 155-156).

Be a writer, artist or researcher, the very critical attitude towards society already produce a “psychological ambience” provides for the reappearance of themes or archetypes of Gnosticism. On this view, writers like Philip K. Dick or mahout McCarthy (whose works attract the interest of writer / producers in recent American cinema) are Gnostics, although they have not realized it. The critical attitude towards the world to describe dark aspects of society and politics by inserting them into cosmic conspiracy goes far beyond the traditional historical materialist critique: outlines a critique of metaphysical. This “psychological ambience” would be given by Conspiracy Beliefs about secret societies that dominate the world originated in the mentality of a society atomized, passive in the face of an incomprehensible complexity of technology that dominates everyday life. That would be the environment from time to time to setup to create conditions for the recurrence of elements of Gnosticism.

These are the four main lines of assumptions that underlie current research on Cinema and Gnosticism. Excluding the first case (with obvious mark of the political right and religious fundamentalism), the other may be different aspects of one reality. Seems not mutually exclusive but complement each other.