Death and Resurrection in “Riverworld” 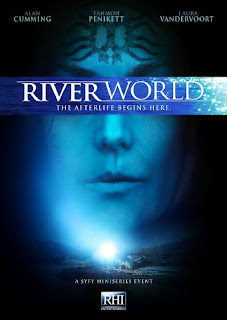 Despite the obvious problems of production and script, when dealing with classics elements of Gnostic symbolism Riverworld (pilot of a possible series) becomes a candidate to succeed the series Lost. Death / resurrection is the theme center, accompanied by the symbolism of the Gnostic Sophia and the division Kabbalah / alchemy in search for the exit from the nightmare that represents the world Riverworld.

Displayed by the SciFi Channel, Riverworld is an adaptation by Robert Hewitt Wolfe (Star Trek: Deep Space 9, Andromeda and The Dresden Files) from a series of science fiction books written by Philip Jose Farmer. The story revolves around a photojournalist, Matt and his girlfriend Jessie. After die in a terrorist attack on a nightclub are transported to the mysterious world of Riverworld, place to which people who have lived in Land are taken in a kind of resurrection.
In Riverworld young people wake up and free from any disease or genetic problems. Ageless, they are able to regenerate. There are the souls of those who one days have passed by Earth in all History. A place that is a kind of second chance or maybe a kind purgatory.
In Riverworld found from anonymous to great historical figures they cross the path of the protagonist Matt, such as writer and novelist U.S. Mark Twain or the Spanish explorer and conqueror Francisco Pizarro. Despartarem to this world (people agree submerged and adrift in a river to emerge and swim to the banks), find themselves, unwittingly in the middle of a war fought by two groups of beings: the called “Salvationists” who want to destroy that world and release all souls, and another group that wants to maintain the status quo. With his powers, these beings (with faces in blue suits monk) interfere in the course of events, creating a sort of chess game.
As stated Jeff Kripal (Professor of Religious Studies at Rice University, Houston Texas), the comic books and science fiction novels became the gospels of postmodern Gnosticism (about this click here and read “The Postmodern Gnosticism & Gnosis “Aeon Byte Gnostic Radio).
Excluding the glaring problems of script and production (production of low budget, many clichés and unnecessary dialogue, narration in several moments dragged etc.), the story is full of classic Riverworld mythical elements of Gnosticism.
To start, the ambiguous nature of where the story happens (Riverworld) is ambiguous: is a purgatory of souls? Another planet? Human souls imprisoned by extraterrestrials? Or simply a collective nightmare? That ambiguity gives the story a character of fable, a fable about the Gnostic man trapped in a cosmos, serving as a pawn in a battle between gods not love him. Where death is not output. After he died, almost immediately is raised to return to the game. 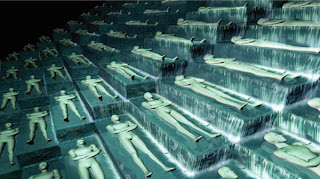 We see, then, after death or suicide of someone desperate (talk of “suicide express”), a vast area where bodies in a state of dormancy that are kept as deposited (visually reminiscent of The Matrix) to be awakened by the beings who govern Riverworld according to their conveniences tactics in the game.
Perhaps this is the mythical Gnostic main theme explored by the film: the hopeless vision of death and reincarnation. As discussed in previous post, Gnosticism see reincarnation as a perverse strategy of the Demiurge to keep humanity trapped in an endless circle. At death / reincarnation there is no evolution, learning. There oblivion, doomed to start again from scratch.
But Riverworld, this Gnostic myth of reincarnation as a prison and is taken to the ultimate despair. Sthephen King on one of his books of suspense and terror said that hell is repetition. Well, that’s exactly what we have in the movie: there is at least the illusion again, the hope of a new day. All are resurrected to resume from where they died. The game has no end.
In the gnostic movie Alex Proyas, Dark City (1998), this same theme was explored: ETs that imprison humans in a city to fake, every midnight, being placed in a state of dormancy for the identities are exchanged with the aim of finding the human essence in transition.
In Gnostic mythology, a female character is of vital importance in human history in hostile cosmos: Sophia. One of the most important Gnostic aeons mythology that character is explored in movies Gnostics in three aspects: as one who has fallen under the yoke of the Demiurge, as one who awakens in the protagonist and the necessity of gnosis as the one who secretly gives her love and wisdom to help men with major archetypal patterns to creation.
In Riverworld the character Jessie is one that encourages Matt to go ahead and fight in that strange world. The character meets the first two items listed above: it falls under the yoke of “villain” Burton (becomes his girlfriend, after losing hope of finding Matt), who wants at all costs, have blown through that world a bomb with nuclear power. But the search for Jessie Matt is the key to understanding the nature of that world. Symbolically, the protagonist will go to meet the “source” of the river, the trapped souls living on its banks.
Finally, the ambiguity of the character Burton. Apparently it is the “villain” (makes use of violent methods to achieve your goal), but in the end, he intends to destroy that world to release all imprisoned human souls. Blow everything through a sort of atomic bomb does not seem to be the best solution: he actually wants a “suicide express” final, no returns, breaking the hell of repetition. Is the proposal for a Kabbalistic Gnosticism: transcending soul by the annihilation of matter, not redeem it.
All Gnosticism harbors a hatred for the subject, seeing it as a prison created by the Demiurge to trap the Light But the form of trasncendê it is controversial: on one side Kabbalistic Gnosticism (a quick shortcut to the escape of the spirit) and on the other, Gnosticism alchemical (transcendence is possible only after redeeming the matter, that is, to rescue the sacred elements in it that help gnosis).
Riverworld, dealing with all these gnostic symbolism, this dichotomy resembles cabal / alchemy to oppose the characters Matt / Burton: the first wants to rescue Jessie / Sophia that cosmos. The second, just want to have everything in the air.
Credits: