Disney XD Freestyle Football: There is a Techgnostic Project for Football? 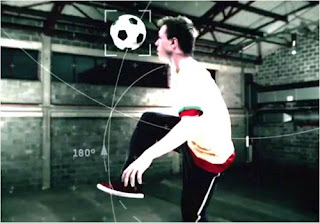 A techgnostic project hovering over the football. The video of the channel Disney XD which has undergone a football telemetry reflects an imaginary regressive project which aims to confine the Game and Play within a technology that aims to eradicate the Evil (error, failure, chance) as a human weakness. It’s what lurks behind every claim for sport technologisation every error of soccer judges.

While typed one more posting to this blog Secret Cinema, my son watched the Disney XD channel. Among the many ads which litters the intervals of the program (and as there are breaks in cable TV!) a caught my attention and I stopped typing. The video is titled “Disney XD Freestyle Football “, alluding to the event’s World Cup in South Africa (Watch the video at the end of that post).
In the video we see a teenager juggling and juggling with a ball football. With clipped editing features, it appears teenager successively in several urban environments (soccer field, court sports, etc. within a deposit.) continuing their maneuvers with the ball.
Suddenly, a feature clearly inspired metalinguistic games in the computer: the movements of the player are shown in slow motion and trajectory of the ball and player movement are scanned by rows geometry as a kind of telemetry, showing the degrees of the angles and curvatures. The ball did not fall once, no failures, the telemetry lines show the perfection of movements. In the latest plan gives the player a teenager a powerful shot into the air, the ball goes up and the camera follows the movement showing the high, the player jumping with fists clenched like a winner in a packed stadium and a shower of shredded paper. 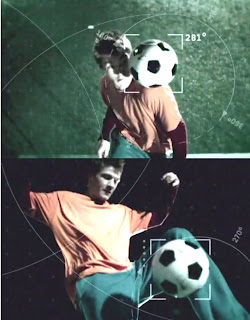 Of course the skill of the adolescent is the result of assembly of successive plans, giving an illusion of continuity of actions. But for a child, still oblivious to the technical capabilities of editing and assembly of a video, the effect realistic is obviously strong. More than the illusion created by editing and assembly, there is something deeper and significant in that video. A paradigm shift for football, reflecting a trend involving all media: the rationalization and neutralization Evil
As already discussed in previous posts, from the standpoint of the Gnostic cosmos physical, since its inception, consists in essence by The Evil manifestations of this ontological nature of evil are in chaos, random, imperfection, “symbolic reversibility” (cf. Baudrillard: Peace tends to War, the Good the Bad, the move to entropy etc..) Accident.
As stated by Stephan Hoeller (in the book “Gnosticism: the hidden tradition”), the scientific breakthroughs like the Chaos Theory and Uncertainty in the field of Physical confirmed thesuspicion of the Gnostics in relation to the physical cosmos: the field of imperfection and evil, a sort of chaotic order and symmetry and non-linear, where each act results in an opposite effect on dimensions exponential.
Certainly the game is in play, in Fantasy and erotic nature that manifests itself clearly. It is these fields that experience a pleasure ironic and paradoxical pleasure in error, at fault. Explaining the pleasure the game is not in maximized performance that eliminates all possibilities of errors, resulting in full transparency. Rather, pleasure is on the road, in danger, the unexpected must be bypassed, exceeded or not.
But the entire complex media or entertainment industry refuse to accept that the nonlinear nature of the game and Recreation. Rationalize and counteract the presence of evil through idols who never fail, skilled stars in 100% of the time.

“Performance Principle” and “Total Whiteness”
Reflected two thinkers, each starting from different assumptions about this media trend: the German Herbert Marcuse and Frenchman Jean Baudrillard.
Starting from the benchmark call Critical Theory of the Frankfurt School, Marcuse thematized in the 60’s ideology of “performance principle” that was behind the apparent liberation of sexuality in the culture of late capitalism. Sexuality was not being released from his own terms (fantasy, eroticism, gambling, etc..), But the principles from the world of work and merchandise: effectiveness, efficiency, productivity, result, rational world of logic and linearity . Sex hyperbolized, maximized, steroids (penis size, number of orgasms achieved, and so on). The field of playful and erotic sex jumps to the field of performance and maximizing linear.
Jean Baudrillard part of references Gnostic Cathars and Manichaeism (as explicitly stated in interviews near his death) to denounce the media’s tendency to create a kind of “total white”: a world de-symbolized, without errors, crashes, dirt, waste . Through a progressive technologization create a world with full transparency, sterilization and cleanliness. Denying the “symbolic reversibility”, where every act produces its opposite: the transparency of Evil
A Techgnostic Project for football?
Returning to the sticker Disney XD, we have entered into this video the aspiration of the denial of evil in the game: football extract its most playful (the fault, mistake, accident) through the imaginary technology (telemetry lines of an imaginary). Football leaves the field of play to insert themselves in performance and “total whiteness.”
Maybe an ongoing project tecnognóstico (in the sense cabalistic and alchemical not – on this important distinction within Gnosticism see links below) for football. The growing protests by the specialized press cons “flaws” of the arbitration and the claim by technology in football (chips or sensors on the ball, referrals for videos etc..) Certainly express this anti-trend to play the sport. Aspiration kabbalistic Tecnognose to impose on the world ugly and chaotic binary code to impose an authoritarian order, linearity, predictability, a cosmos, in its essence is exactly the opposite.
But the pleasure of every game is the opposite: pleasure in circumventing the telemetry that the Demiurge wants to impose its flawed cosmos and laugh ironically, every failure, every accident. Or, as spoken by the Heath Ledger’ s Joker: “Why so serious?”.
Related Posts: