Faith and Gnosis in “The Road” 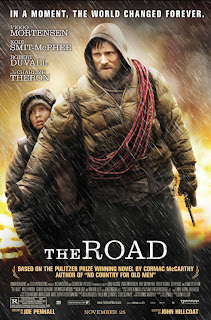 The Road (2009) is a film post-apocalyptic genre that you never saw. Unlike films with the same theme as The Book of Eli (2010), the faith of the protagonists is not in God or sacred books. Faith lost must be sought in the “heart fire”, the Gnostic quest for remembrance of what was lost and that is not in this world, but somewhere in the idyllic “South”. Warning spoilers in this post.

The world as we know it was destroyed by some unspecified apocalyptic event. The result is the progressive death of the planet: With the exception of humans, animals and plant kingdom are dying in the midst of earthquakes and a persistent rain falling in a world ever more gray and cold. Without food, groups are organized into gangs in search of fuel and other human beings to be cannibalized. Those who have not resorted to suicide struggling not to be caught by these gangs and survive without eating their peers.

A man (Viggo Mortensen) is his only son (Kodi Smit-McPhee) for the company in this arid land. The mother (Charlize Theron) is killed, and the only hope of surviving the winter is eternal cross the country towards the coast and head south. Along its path will face the constant threat of gangs and cannibals the dangers of a planet that is dying.

This plot seems familiar: another post-apocalyptic movie in the line of Mad Max or the recent The Book of Eli (aka, as the Americans like to destroy your country in the movies!). But his narrative glacial and precise, with a constant atmosphere of terror by recurrent signs of widespread cannibalism, makes “The Road” a movie post-apocalyptic as ever seen.

But mostly, the theme of hope and faith is approached by a Gnostic bias, which makes it a different movie for the genre. The film is an adaptation of the book “The Road” (winner of the Pulitzer Prize) from mahout McCarthy whose work seems to have great influence of Gnosticism in the book like Blood Meridian (his film adaptation is planned for 2011), a western that, according to Leo Gaugherty , “is a gnostic tragedy, a rare union of ideology with the tragedy Hellenistic Gnostic” (“Gravers False and True: Blood Meridian the Gnostic Tragedy” Southern Quarterly 30, No. 4, Summer 1992, pages 122-133).

On The Road father and son (important detail, the film has no character name) struggle to find safe places and keep warm. His father fiercely protects her son, and a disturbing scene shows him how to kill if necessary – presumably if he is captured by cannibals and can not escape. But he also tells his son that they are “carrying the fire”, a phrase that is repeated several times in the film. This “fire” is both the literal fire to cook food and keep them warm, but also the hope that they have for humanity. More than that, is a Gnostic symbolism.

As the man talks about his son: “If he is not the word of God God never spoke.” The father and son must carry a particle of light in the heart, particle, according to the Gnostic mythology, is reminiscent of our true home in the Pleroma. Beings who are exiles in a cosmos in the fall, we should keep this particle (gnosis) that we bring back to our true origins.

Constantly in the movie his son is concerned with how to distinguish good from evil men. As in Blood Meridian, here the antagonism Manique and Zoroaster: the division between “good guys and bad guys” is not one of Manichaeism Hollywood, but the fundamental cosmic conflict over the ownership of these particles of Light Avoid being cannibalized by “Bad Guys” is to prevent the Demiurge (craftsman of that post-apocalyptic world.) take possession of the particles that give a life to a world in decline.

Therefore, the way the topic of faith and hope are addressed by the protagonists is typically Gnostic. Unlike the movie “Book of Eli” where faith is given by the words of the Bible memorized by the protagonist (antagonist fight to take possession of the holy book, too, remember his words), here faith is approached as a gnosis, a dipping process which seeks to close in the heart of light that the particle will be 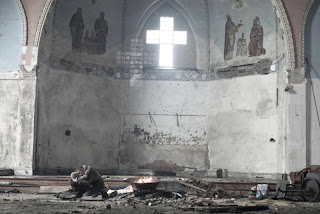 the benchmark for discerning between Good and Evil Throughout the film there are several religious references (Verse of the biblical book of Jeremiah – “Behold the Valley massacre “- graffiti on a bridge in ruins, the protagonists take shelter in a church also in ruins, like poles tilted crosses were stuck on land razed etc.).. Religion is placed as an additional detail of a scenario in ruins. It remains the protagonists an intimate search. No more faith in God, but only in yourself. It is the typical path of Gnosis.

Unlike his father who was molded by years of desperation became pitiless, fierce and distrustful of anyone who crosses the path, the son, is still rather innocent and naive, but aware of the evils of the world. Each dialogue cynical view of the helpless father is contrasted by the hope of finding the child and may still exist within all people.

Curious in the film is that no character be named. This has a double meaning in the narrative. On one hand, in a post-apocalyptic world names are useless, the men become animals like cattle herd for the cannibals. Second, in this circumstance actions speak more acts that names or social roles that may result. The name is not a person and is not necessary for you to connect with them as something “real.” Our actions are what defines who we are and says, not our names. More Gnostic theme, and perhaps the main theme of the film: more important than names and social roles are the actions and the heart that will indicate whether you keep the particle of light lit inside. In one scene, a man asks if Mortensen is a doctor, he replies: “I am nothing.”

After reaching the coast and the father dies, the boy will find a family that will adopt. The final dialogue between them is the synthesis of the Gnostic message contained in the film: the human beings as the exiles who have a recollection of his true origin. The wife says to the boy: “I am so happy to see him. Did you know that we have followed you? I have seen with your father. We are very lucky. We were very worried about you. Now we do not have to worry about anything else. “

The boy not only found in the intimate human kindness. This line of dialogue is emblematic of a deeper meaning close Gnostic: anthropos as it declined for the cosmos dominated by a Demiurge that imprisons us, we are observed by Sophia (a character who talks to the child is female) accompanying our progress and falls, waiting for the memory of what was lost in the wake.

Symbolism of Water and Cardinal Points
In “The Road” have different symbolism and iconography, but two stand out in symbolism fundamental to the narrative: the beach (or “coast” as referred to in the film) and the south cardinal point

The final important dialogue, as his father’s death, occur on the beach. In our research we can see that the water element is recurrent in Gnostic movies: does not appear as a mere ornament or geographical context. Participates as an active element of signification, as part of decisive changes in the actions of players or interpretation of the story.

“The symbolic significance of water can be reduced to three dominant themes: source of life, a means of purification, regenerescência center. These three themes are in the oldest traditions and form the most varied combinations imaginary “(CHEVALIER, Jean and GHEEBRANT, Alain. Dictionary of Symbols, José Olympio Editora, 2009, p.15).

On the beach, the son sees his father’s death (symbolically marking the death of the bonds of anthropos, the son, with the physical cosmos that traps) and the final encounter with Sophia (“now we do not have to worry about anything else,” he says) .

The survival strategy of the players is to go to the coast and then sail to the South The cardinal points have an elaborate symbolism in various cultures. Many beliefs about the origin of life, the abode of the gods and the dead, the cyclical etc. organized around the axes cross-shaped cross. Analogical thinking for the opposition creates a bond: the South is opposed to the North but the South leads the North. This principle of discontinuity is the basis of cyclical processes of chain initiation of death and rebirth. For many esoteric traditions each direction is associated with an angelic being.

The South is associated with the angel Mikael, who helps the pilgrim to travel safely. Like the protagonists of “The Road” looking at the journey through the devastated lands lost faith and flame (gnosis) in the depths of human nature.