From Narcissistic Paranoia to Spiritual Paranoia in “Shutter Island” 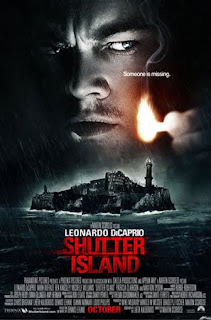 For those who deal with research on the recurrence of gnostic themes in current film production, Shutter Island is reminiscent of a whole range of films (The Matrix, Dark City, Truman Show, Memento, Thirteenth Floor etc.). thematizing paranoia and schizophrenia as paths to the awakening of consciousness of the illusory reality artificially created by a conspiratorial plot.

Scorsese builds a heavy and tense atmosphere typical of film noir, with all the iconography and symbolism of the genre (fog, fogs, cigarette smoke, rain and storms, overcoats, windows and mirrors) on the story of two federal police (Teddy – Di Caprio and Chuck – Mark Ruffalo) who land on an island where it is installed a madhouse judiciary. They’re there to unravel the mystery of the disappearance of a prisoner on an island whose escape is impossible. The important detail is that the narrative is located in 1952 at the height of paranoia of U.S. public opinion about the Cold War and anti-communism, a context that further enhances the film’s paranoid vertigo.

As in any film noir where nothing is what it seems, Teddy’s character embodies the archetypal detective: he has proposed to solve a puzzle without knowing what the final solution of this puzzle will lead to their identity lost or forgotten. This loss creates a state of paranoia: who to trust? How to distinguish truth from falsehood, illusion and reality? Why do events move without causality? How to know if what he feels is sanity or madness?

What at first seems like a linear narrative about the precision of the parts that lead to solving the mystery of the escape of an inmate of the asylum, is slowly being deconstructed, casting doubt on both the protagonist and for the viewer’s identity as the protagonist existence of a prisoner who disappeared.

There are strong indications that Teddy is insane (dreams of his daughter, Dr. Cawley – Ben Kingsley – know your dreams), but if we want to go back to the real understanding of this film, we must bear in mind the aforementioned film “Dark City” , about a group of human beings who maintains a place of quarantine for deploying them false memories.

Teddy may have been drugged progressively, starting with “aspirin” it takes at the beginning, from which vivid dreams begin. Throughout the film, Teddy’s mind is being bombarded with psychotropic drugs, as well as the institution is being bombarded by storm. Teddy’s mind is heavily damaged, enough so that their mental defenses are reduced, leaving it to be manipulated by Dr. Cawley to believe he is a patient on the island and who had murdered his wife.

What differs from the classic noir is that while there everything revolves around the theme of “human, all too human” here in the movie “Shutter Island” is not the detective tries to solve the puzzle of personal relationships, but the enigma of the illusion of reality that captures the spirit. Then the memories of Teddy the corpses in the Dachau concentration camp (he is a veteran of World War II) are associated with evidence that the island would be an extension of the Nazi experiments on mind control.

Narcissistic Paranoia and Spiritual Paranoia
Besides the Gnostic theme of reality as an artificial construct, this is also the theme of paranoia. For Valentine (Gnostic teacher, student of St. Paul, born in Carthage around 100 AD) is the initiate begins to suspect that the objects around are illusory, how then, can discern between sanity and insanity of their perceptions that the world want to label it? How to separate the desire of fear? Através da paranóia. By paranoia.

Unlike the strict conception of narcissistic paranoia – the idea that the subject is that the world is focused on a prosecution against himself – the design Valentinian is borderline between sanity and madness, through a radical distrust towards the world to around what is given. Living in this sort of limbo, at risk of falling to one side or the other: to become hopelessly insane or prepare to hide in a lucid madness inhabiting a space between the clarity and emotional instability. If, by definition, Gnosticism denies the material reality as an illusion fabricated by unknown purposes, paranoia is the way in which the characters seek enlightenment.

Just like in “The Truman Show” (1998), which seeks to rationalize the paranoia of the protagonist (Christof, the demiurge, tries to rationalize the melancholy of Truman trying to build it within a Freudian plot: guilt for the death father, lutificação process, punishment itself through a hysterical manner) the same way in The Island of Fear psychiatrists seek to streamline the asylum the growing paranoia of Teddy (“all you do is considered part of the madness, its Fears are called paranoia, his survival instinct is labeled as a defense mechanism …”). Attempts to reduce the sacred paranoia (paranoid distrust of spiritual reality as a whole constructu false or corrupted) the narcissistic paranoia, Freudian mere plot of a beleaguered ego.

The Narrative Irony
Beside the artificiality of reality and paranoia, is associated with a more gnostic theme: the irony. From beginning to end, the film creates a narrative radically ambiguous.

Since the first sequence we see systematic discontinuities between camera shots: axis breaks, discontinuities field / reverse shot etc. The plans that we have the sea or the sky in the background has a scenic character purposely reminding Hitchcoock films of the 50s as Vertigo (meta?). All this gives a character of artificiality to the narrative, leading the viewer to a typical ironic situation: what we see is the current reality or psychic projections of the protagonist? The images correspond to a realistic narrative or dream. What is the point of view of narrative?

Moreover, the story is ambiguous: the protagonist is actually a federal police looking for the solution of a puzzle that ultimately becomes a giant conspiracy or the prisoner’s main mental hospital, able to create hallucinations to forget the murder of his family? He is a prisoner of psychotropic hallucinations of a government conspiracy or a prisoner of his own inner dramas? It does not matter, because the interpretations overlap and complement each other.

In the end, we have the main theme Gnostic: the durability of the particles of light and spirit before a material universe corrupted. herefore, the end is emblematic: the spirit of Teddy can not be corrupted, leading psychiatrists demiurges the “final solution”: he is led to the lobotomy to confine the spirit finally end in prison – the body devoid of free will. “What could be worse: to live as a monster or to die as a good man?” Teddy delivery to the second option to keep the spiritual integrity.