Gnosticism Kabbalistic and Tecnognose: the shortcut to gnosis 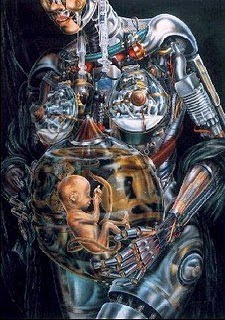 The beginning of all our research and reflections on the recurrence of Gnosticism in Film and Audiovisual left the paradoxical confluence between mysticism and new technologies: Tecnognose. Unlike the movies where gnosticism gnosis is presented as the soul grows and refines from the body, Tecnognose matter is a golem that have deformed the order of the spirit to come alive. The consequences are totalitarianism and solipsism.

The secret alliance between mysticism and science flourish in the twentieth century with the revival of Kabbalistic myth of the Golem in the scientific and academic circles over the construction of modern technological utopia: a technological route traced by a benevolent elite that allows overcoming the ruins of a material world chaotic and imperfect and rescue the anthopos present in humanity, a return to pure Adamic trapped by mortality.
Kabbalah and the myth of the Golem
The Golem in Jewish mythology flourished during the Middle Ages and the Renaissance, but has its roots in the second and third centuries when Gnosticism created the myth of the perfect anthropos who fell in the imperfection. This myth of the decline is described in a basic narrative: emanation, and error trapping. In the Coptic Gospels anthropos is the first manifestation of the true God and above the Demiurge. Inside, contains the entire universe, particles of light through them, to redeem the material world and imperfect. However, it is ostensibly defeated by the forces of the Demiurge and kept imprisoned in circles materials. After this apparent decline, the anthropos hear the call of the God of Light, returning. But part of his soul is left behind, trapped. Particles of light serving prisoner that create the material cosmos as we know. Every time people hear the call of light, releasing trapped particles. When everyone has seized this call, the Anthropos (Primal Man) will be fully completed and the matter annihilated.

But how to return to the immaterial whether Anthropos inhabit this physical cosmos? Gnostics replied that the way to get that perfect Adam would be through asceticism or death. But there is another way, in an opposite direction: down to the world of matter. Medieval Kabbalists developed this method, namely, that of redemption through intense experiences with the matter, in their darkest realms. If before the ruins had perfection, it is the Kabbalist turn the matter to arrange the pieces that connect to all lost. Theogony attuned to the Cosmology.

This output produces the Golem ( “unformed”), the return to a state of matter misshapen and imperfect before God to form and perfection. The Talmud says that Adam, before receiving soul and language, was a Golem. God commands the matter through the code, building a world made out of letters. It is the basis of teourgia of Kabbalah. The only thing that separates us from God is sin. If divine creation is made from code, a being without sin can do the same. A person practicing this divine magic does not violate the sacred, but holds the potential of the spirit. The old discussions about the Golem in the twelfth and thirteenth revolve around this primary question: Can a wizard to create an equal or greater than the human? You can bring back Anthropos? For proponents of the medieval “ecstatic Kabbalah” the creation of the golem would be the culmination of a mystical experience, a symbol of union with God: the creation of life from the recitation of sacred letters.

The Shortcut to Gnosis
If the twentieth century physics and cosmology describe a scenario of chaos and improbability (it seems that God play dice with the universe through the formulation of chaos theory of N. Bohr and Heisenberg’s Uncertainty Heisenberg), from this confirmation of the secret belief Gnostic primary flaw of the cosmos, the mystical Kabbalistic will be introduced in science to form a new biology made from a special relationship between biology and computer science.

Information Theory and model of computer binary code will offer a model for the design of DNA in the 1950s. Life comes to be seen as a kind of cues. DNA is a form of data processing, as well as the computer, enabling the instrument processing, therefore, be seen as a way of life emerging. Some now admit that we are near the time of the creation of new computer chips consist of DNA-RNA.

Robert Jawstron, NASA, was among the first to propose the advent of “disembodied intelligence”. He envisions the day when we will become a “race of immortals” based on a computer mind.

“One day a scientist will be able to remove the contents of your mind and transfer it to the computer’s memory. Because the mind is the essence of being, we can say that this scientist went into the computer and went to live there. At least we can say that from the moment that the human brain inhabits a computer it is released from the weakness of mortal flesh … He is in control of their own destiny. The machine is your body, it is the mind of the machine … This seems to me the most intelligent and mature life in the universe. Inhabit silicon plates and no longer limited by the duration of life inside the deadly cycle of a biological organism. This kind of being will live forever. “(Robert Jastrow, The Enchanted Loom: Mind in the Universe, New York, Simon and Schuster, 1984, pp. 166-67

Golem, the deformed area and entropy, modeled by binary codes sacred. If the DNA proves the coding divine matter through letters, the information will be the syntax that will remove the noise and the entropy of the organism that inhabits a universe flawed.

Creator of virtual reality, Jaron Lernier believe that this mystical motivation becomes the main attraction of cyberspace. For him, many hackers have the hope of one day live forever after a final upload to the inside of a computer. Lerner characterizes this fantasy as the beginning of a “culture of zombies dominated by ex-humans who” are ready to leave everything behind imagining living in a hard drive, only interacting with other minds and other elements of an environment that exists only in a software “Therefore, the essence of being, the mind (or particle of light that connects us to our original home, the Pleroma), can be scanned for information.

This is the shortcut to the Gnosis: technology as the quickest route to realizing the project of redeeming humanity exiled and imprisoned in circles materials.

This ancient Gnostic quest to transcend the flesh is the emotional subtext behind the euphoric reaction to each new computer on the market and every website or blog with frivolity that is thrown. Lernier even suggested a new psychological category of users: the “nerdiness” intellectually search scan any distinction of quality, feeling and affection. Emotionally, seeks shelter that protects the human intimacy and the demands of the body.
Happily, the guy takes off the body to live a fantasy of unlimited power.

Erick Felinto will appoint this guy as the ciberutopias “tire guy”, a form of subjectivity that you want to release the limits of the body, one almost self divine and spiritual nature (pneuma). This guy would tire of the following characteristics: a total communication (such as intangible angels wandering in cyberspace without barriers to communicate), through “hipermediação equivalent to the immediacy of digital media” and the total mobility:

“Immersed in a world without borders, without limits, the ciberanjo enjoys the most absolute freedom of movement. Subjectivity as air, can move or extend at will, can even aim for ubiquity. In fact, it is not just mobility, but the ability to model the “space” around them. “(FELINTO Erick,” The Tecnoreligião and the subject tire imagery of cyberspace “, In: Journal Alceu v.6 – n.12 – p. 115 to 125 – Jan. / Jun. 2006, p. 120)

How Felinto notes, the apparent variety of identity on the Internet and the multiplicity of selves in networks hides a weakening or fragmentation of subjectivity. As he concludes: “At a very dark, the subject of the networks I would like an absolute, you want to be in opposition even to expressions of otherness. This person often is limited to ratify the same in the sense that, as concluded a study of the ethnography of the Internet cited by Rüdiger “surfers, mostly not open to the other”

The individual in the network becomes a node that would just reiterate what it is external. As said Christopher Lasch, the appearance of a narcissistic ego great (pneumatic, spiritual) covers an emptying of one’s own subjectivity, besieged, adapts and reproduces the mimetic environment to survive. It is the subject fractal, as a fragment that plays within himself, endlessly, the pattern of the whole (See the book Lasch’s The Least I).

If the boundaries between Self and Other or disappear, first by the immediacy of the networks (the actual time it feeling that the map is the territory), second, the permeability of the ego and the third by a subjectivity that you want to get rid of limits of the body is in crisis the perception of otherness.

Gnosticism Alchemical versus Kabbalistic Gnosticism
While the Kabbalistic Gnosticism through technology and language, see the matter as a prison, confinement and limiting the potential of the spirit, gnosticism alchemical for the spirit behind the matter, life emerging from death, the order arising from chaos the soul that grows from the body. In short, Gnosticism search alchemical transmutation and not transcoding cabalistic. While the trend Kabbalistic matter is a golem formless and lifeless that have imbued with the spirit to come alive (binary code technology and information), the trend encourages alchemical metamorphosis and the redemption of the spirit through the material existence. The first is digital and abstract, the second is analog and sensual.

If the Kabbalistic Gnosticism seeks to shortcut through the technology of language and the fastest way to the spirit leave the field, the bias for the alchemical Great Denial, the tertium quid, a third alternative between illusion and reality. If the truth about God is beyond human knowledge, the denial of knowledge is the sacred path. The man receives the objects of knowledge and the words as they were vehicles of knowledge in the hope that they can reveal the truth of things.

In a world of illusions his knowledge can only be an illusion also. Neither illusion (created by an imperfect cosmos) and not the reality (Knowledge, Science and Language), but the sacred, the experience that leads the individual beyond those