Gothics and Darks roam in malls: the fate of the sacred in youth and Teens 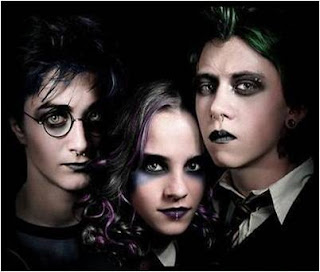 The impetus for the sacred is neutralized by the rationalism. The power of symbols and pagan deities is aestheticized, for example, through the imaginary dark, gothic or an entire sub-zeitgeist “that fascinate successive generations of young people and adolescents. It reflects the desire by young “immediate religious experience.”
Every ideology has its moment of truth (Theodor Adorno)
This week the students of the Screenplay Structure of the undergraduate course in Communication at the Anhembi Morumbi University produced its first arguments and Abstracts, orally presenting their productions for the class. A recurrent feature in the narratives presented arguments struck me: the 14 stories presented, almost half were covered by an imaginary Gothic and mystical, full of alchemical symbols, players with schizophrenia who do not distinguish reality from illusion, underground spaces and parallel worlds attacked etc. by vampires.

Stories whose protagonists usually teenagers, who lead a normal life until they discover they have strange powers and are secretly observed by dark entities. Why are young people aged around 20 years of age are fascinated by the dark imagery with colors while depressing and epic?

It marked the constant revival among young people of this universe that over the decades makes several labels. In the 70s we had the “rock horror” and “glam rock” of 70 years. Its icons were the androgyny of the character Ziggy Stardust by David Bowie (with the emblematic song “Rock and Roll Suicide” and the relationship of the couple with death – “You’re too old to lose it, too young to choose it) and entire universe and underground urban trash synthesized in the movie “Rock Horror Picture Show” – 1975). In 80 years we have the “Dark” synthesized in icons like Robert Smith of The Cure, Peter Murphy of the band Bauhaus. Songs with lyrics inspired by the gothic universe of romantic literature of the eighteenth and nineteenth centuries. Replicantes melancholy (in the movie “Blade Runner” – 1982), platonic love and the feeling of a generation have reached adolescence and youth at the party (hence the post-modern nostalgia for the 50s in fashion, architecture and film). In 90 years the “Dark” is recycled by a Gothic and Romantic literature is replaced by tales of terror. Young people whose aspiration is to become creatures of the night, with long black capes and special contact lenses that change eye color. This end of the first decade of this century we have the Twilight movie and musical imagination “Emo” distilling these depressive tendencies in young people and adolescents

Depressive tendencies
Already in the 70 German researchers Dieter Prokop and Lakaschus (see the collection of texts “Dieter Prokop” collection “Great Social Scientists” Atica Publisher) addressed as culture media dealt with these depressive tendencies, especially in young people. They analyzed how mass culture created a sort of “sportsmanship” in the relationship between youth and the media content on the one hand the young elements for stimulating artistic vitality, which combats the feeling of lack of substance in existence. On the other hand, the public does not want their peace or routine are destabilized by the true latent contents of this information that may put into question a whole entire order.

Anyway, the moment of truth in that ideology is the genuine desire for transcendence or break in this young, often wrapped around symbols and archetypes of the Sacred and Religious. With the emptiness of political mythology (Che Guevara, Communism, Marxism, etc..), We now have Sacred and Religious imagery as a new channel to transcendence by the anguish of the young (although we find the same component in religious and eschatological utopia policy Communism in the past).

As Nelson says Victoria, Western rationalist culture that momentum for the sacred (or more precisely, the belief in a multifaceted cosmos between the sensible and invisible, the vivid presence of God or the macrocosm in each one of us – the gnosis) is processed and confined the aesthetics of art and literature and made subjective by means of psychology and psychoanalysis.

“The displaced religious impulse surfaces elsewhere not as the demonic but rather as an overvaluing of the object beyond its intrinsic function in our lives. Craving its holy objects, its temples, its roadside shrines and absolutions, we have transcendental in distorted form invade art, the sexual experience, psycotherapy, even the quasi-worship of celebrities living and dead. (…) The aesthetic anaesthetizes. It annihilates function, taking the object out of the realm of necessity into the desinterested contemplation of the subjective viewer’s consciousiness … As opposed to religious modes of apprehension that attempt to penetrate reality in ritual action and symbolic codification, the aesthetic framework takes things out their context, stabilizes them on the surface. What better way might the power of ancient pagan deities be neutralized than by viewing them through the ideology of the aesthetic, as ‘art’.””(Nelson, Victoria. The Secret Life of Puppets. Harvard University Press, 2001, pp. 19-20.

This description is the point of destination real impetus for the sacred in this couple, whose symptoms are depression, pain and suffering arising in a society that tries to destroy or at least shift the momentum to develop pragmatic and productive. This impulse translated by means of mass culture, through an entire sub-zeitgeist gothic, strange, bizarre and trash, becomes superficial aesthetic attitude.

That is what lies behind, for example, the paradoxical promotion of McDonald’s on display in bus doors: to win the DVD of the movie Twilight in buying combos fast food meals. It is the climax of the sacred destination described by Victoria Nelson: the characters of the film darks lost “place of people happy.” The true pursuit of “religious experience” immediate neutralized or aestheticized imagery in the movie “Twilight.” The power of an entire pagan symbolism that could put into question the principle of reality struck down by esteticização media. This allows young people dressed in black sit comfortably in the bright indoor consumption of fast food. Darks and goths wandering in malls.

However, the moment of truth that ideology remains. The allure of the “strange” remains generation after generation of teenagers, as the time when renewed the person tries to find a way by which the identity can escape the rites of passage to adulthood, where rituals, such as the Science and Religion celebrate the settlement of the individual in front of a totalitarian order.