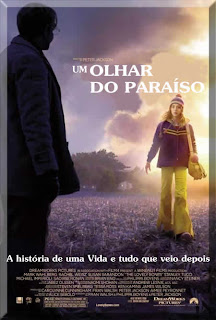 Centered in the story of a girl who was murdered and observes her family and her killer “sky” (not exactly, but in a limbo between earth and heaven), the adaptation of the novel “Lovely Bones” by Alice Sebold forget the intelligence and intricate story of the book and confines the experience of the sacred in the famous Hollywood fantasy-cliche of “break-the-order-and-return-to-order”: you break the Order must be punished! This is the movie Lovely Bones, (2009)

As already discussed in previous posts, the experience called the Sacred understood as such by the mainstream media of today is in a kind of secular theology: an experience that would originate in the perception or intuitive sudden discovery that the individual had a connection with a ” higher order, with a total cosmic or divine.

Discontinuous and marked for death, the truth would not be on individual experience, but in the settlement of any particular perspective on behalf of a totality ( “We are all one,” the totalitarian slogan New Age).

From this perspective, such as Sacred Theology secularized have two “functions” in a violent way to adapt the individual to social wholes (order corporate, political, moral, etc.). And bring comfort and streamlining the individual pain and suffering resulting from this forced adaptation (to show individual that he is insignificant compared to the larger designs of the Cosmos).

As in the movie Rebel Without a Cause (1955) where the character of James Dean (Jim Stark) looks at the stars in the Planetarium and says he is always there for, to contemplate the immensity of the universe, to see how their problems are insignificant.

Similarly, Lovely Bones confined to the experience of the sacred experience of successive punishments for transgressions of the characters of the Order. And the movie follows the fantasy-cliche surprisingly rigid and schematic in the style of movies involving teenagers in horror or thriller genres. If not, see.

The construction of the characters of mother and grandmother of the protagonist who is murdered (respectively Abigail Salmon – Rachel Weiz – and Lynn – Susan Sarandon) are exemplary: we see Abigail in bed reading books by Camus and beatnik literature, while the grandmother drinks and smokes compulsively and encourages her granddaughter to have their first love experiences. Such transgressive behaviors deserve punishment: the murder of the daughter / granddaughter Susie Salmon disturbance and happiness of the family.

The sequence preceding the murder of Susie is exemplary. She dreams of the first kiss that will give life. She is in love (with the encouragement of her grandmother’s liberal) by Ray (Reece Ritchie), man “mysterious” (in American movies just being a foreigner – he is English – to have an air of “mystery.” The typical American xenophobia) . Breakdown of order and immediate punishment. In the next sequence she will be murdered by serial killer in the cornfield. Individual dreams must be slaughtered by the reality: one of the variations of the fantasy-cliche of “break-the-order-and-return-to-order”. 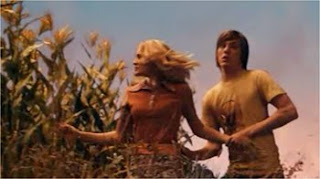 Moreover, the cornfield is the flagship site of the narrative: there are the young lovers in search of their first sexual experiences. And there is also the serial killer, the evil lurking, ready for the punitive role of implementing the Order and the Totality.

While the transgressors are disappearing in the plot (the wife Abigail become depressed and leave home for self-exile as a worker in a rural farm and grandmother Lynn simply disappears in the last sequences), the characters more “right” or “focused” win space in the confrontation against evil, the serial killer. The victim’s father Susie, Jack Salmon (Mark Wahlberg) decides to use his talent for detail (he is an accountant) and investigates the possible suspects and sister Susie, Lindsey, (the plot described as more realistic and pragmatic than Susie) is correct intuition of who is the killer and find the evidence to hand to the police. The rationality and pragmatism are necessary in the face of attitudes “fucking-crazy” that just attracted Evil

Meanwhile, in “heaven” or “limbo”, attitudes offending Susie still being punished (eg, aggression and nearly suffered death by his father as caused by the insistence of Susie observe life on earth and nourish hatred for his killer). The end will be constrained by other girls victims of serial killer and adapted to the divine plan of a cosmic whole and perfect harmony.

In addition to poor adaptation of the original novel and the schematic of the primary script (good and evil without shadings), there is something more serious behind: the supposed experience of the Sacred sold by the mainstream media as the resignation of any individual or any dream before mysterious purposes of unity. The film Lovely Bones is nothing more than another example of the relentless ritual of liquidation of the individual on behalf of Universal.