Mister Maker comes out of nowhere in an infinite background white. He pauses, shrugging his shoulders and thinks … eureka!!! Uma idéia! An idea! Then begins to produce several miniature objects: sofas, shelves, tables, window, curtain, to build a small stage design. The high notes with pride, his own creation, with its open arms enveloping her. Suddenly, a special effect like a star dust and shines involving Mister Maker, bringing it into your own work. The small stage design becomes the setting within which Mister Maker submit their inventions for kids and crafts.

This opening program Mister Maker of children’s channel Discovery Kids, has a suggestive symbols at least an openness unheard of for a children’s program of this kind. A kind of narrative of Genesis is told to know where it came from the universe run by Mister Maker.

There is a flavor that Gnostic symbolism. He is the Demiurge (the Gnostics hybrid form of consciousness emanating from higher planes, creator of the material cosmos as an imperfect copy of the fullness of the Pleroma), the architect of the scenery and objects and characters from the show. He suddenly appears in an infinite background (he was not created but “emanated”, according to Gnostic mythology).

Just as the physical universe created by the demiurge is imperfect (chaotic, fragmented and finite) for being the result of a cosmic accident, the universe of Mister Maker is uneven, disorganized and prone to riots (such as the “doodle-drawers”, because they are protesting floods). Of course, all this for the fun of children.

It is also symbolically suggestive framework “Minute Make” where Mister Maker runs against the clock to build one of his inventions. After a minute, Mister Maker back the time (or “tape”) to explain the steps now to slow and understandable. The time and becoming are the major flaw of the cosmos created by the Demiurge:

“The scriptures say that the Gnostic Demiurge projected lap times as a poor imitation of timeless eternity. The order, the greatness and legitimacy of the cosmos are adulterated, and more than likely, under the semblance of order and progression casual unchanging cosmos is chaotic and haphazard “(HOELLER, Stephen. Gnosticism: the occult tradition, RJ: New Age, 2005, p. 201)

Although he created the universe, he is a slave of time and becoming. Ironic situation for children: the creator of all racing against time, often pilloried by a madman who goes cuckoo clock. At the end of each program, Mister maker says, “my time to making art is over, but yours is just beginning.” Racing against time and time as becoming, finitude, limits. Mister maker wants to teach more than how to make art and toys: want to show children the inevitability of time and the finitude of its creation.
The Platonic World of Forms
Part of geometric shapes that create designs also draws attention. There is a Platonic symbolism: the precession of the perfect forms over the material world. Snore forms on top shelf Mister Maker, waking them. Then they jump from the top (the “World of Forms” platonic) fall into a dizzying speed (emphasis added special effects with the cries of the forms in effect doubled amplified and echoes). On the floor they dance and identify with. In the end, one way to identify again, light and form a figure with its shape, or having to count how many times the form is submitted twice, and then ascend, back to the top level of the shelves.

Jean Baudrillard would talk about the precession of simulacra: the perfect forms precede reality. They are just waiting for the creator / the demiurge awaken to hold the “big bang”, the appearance of concrete forms in the physical cosmos.

Genesis, creation, emanation, demiurges, all this for kids? Of course we’re not trying to prove that the existence of a Gnostic conspiracy to manipulate children and unsuspecting parents. But if Mister Maker handles symbolism (or archetypes) with a Gnostic flavor to an unpublished children’s program of this kind (crafts, arts and toys) that might be the indicator of a change in sensitivity of the new generation: the predominance of a conscience “goal”. After all, Mister Maker not only makes toys and art: he is the architect of the universe itself where to move (the end, puts the whole scene back to a box and everything returns to infinite depth).

From Epic to the Meta-narrative 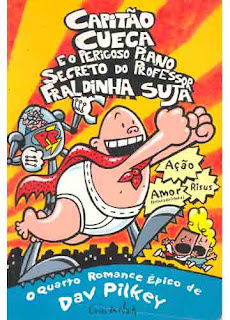 The children’s content in the media no longer have an epic narrative (focusing on action and heroism – knights, witches, pirates, steam trains, etc..) To acquire a metalinguistic narrative, reflective, ironic. This phenomenon has been appointed by the British historian Peter Burke. For him contemporary children’s characters such as “Captain Underpants” adventure mixed traditional with irony and metalanguage:

“(…) The tricks with which to play, how to change the letters on the menu for lunch in the school canteen, to be as old as their own canteens of schools. In other respects, however, the stories are not even a little traditional. They may even be described as postmodern, thanks not only to the recurring references alternate universes, but also, especially, love the parody of the author and especially for the Self-reference. The hero, Captain Underpants is a parody of Superman, a guy more chubby than athletic, singing praises to cotton underwear while flying in their mission to bring the villains to justice “The captain is also presented to the reader how to create George and Harold, who spend much of their time, both at home and at school, writing and drawing comic strips about it. His comic books are reproduced in the series, so that
readers see themselves sucked into a world of comic within a comic book. So really postmodern, the division between fiction and reality will lose clarity as the stories unfold. ” (BURKE, Peter. “Post Modern Children” in http://blog.controversia.com.br/2009/03/28/crianas-ps-modernas/ )

Pink Dink Doo “and” Charlie and Lola “are animations for children who are also examples of this shift in sensibility. Pink creates stories for her younger brother, scoring and creating all the time meta-narratives. In the second part of the episodes, there is a sort of quiz show with questions about the story invented by Pink. Self-reference and conscious parody permeate episodes.

Back to Mister Maker, it seems that the Gnostic narratives seem to fall very well in this environment, “goal” of children’s culture postmodern. After all, think that our universe is not a stable and enduring reality, but an artificial construct that there has always been the work of a demiurge clumsy and imperfect, seems to sharpen the postmodern sensibility.