The Fate of Religion in the world after the attacks of September 11, 2001 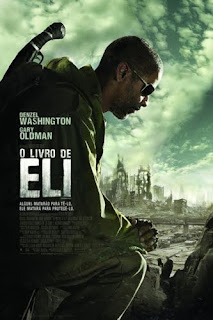 The Book of Eli (Book of Eli, 2010) reflects in each scene the imagery after the attacks of 11/09/2001 where religion and the clash of civilizations are responsible for global conflicts. Therefore, it remains to be neutralized religion at its heart libertarian (Mysticism and Sacred) and become a model of asceticism and discipline martial for “new priests.” Warning: this post contains spoilers!

If the films in the ’80s-themed post-apocalyptic Mad Max reflect the steroids narcissism of conservatism of the Reagan era, films like the end of that decade continued to reflect the imagery after the attacks of September 11 and all the justifying ideology of international politics anti-terror U.S.. As we know, the alibi in anti-American terrorism is based on the existence of a “clash of civilizations” between East and West, between Islamic fundamentalism or other theocratic cultures and societies and the liberal democratic West. The issue went beyond the political, but through the cultural and religious: our God is more tolerant and liberal than the other. Countries wage wars and attacks in the name of a god, as we build democratic political institutions that reflect a religious system of a god tolerant, practicing compassion and love.

The film Book of Eli explicitly conservative ideology that sits in the era of supposedly liberal Obama administration (which means, in relation to the Bush era, nothing should change in international relations the U.S.).

The protagonist Eli (Denzel Washington) cross, alone, the U.S. apparently devastated by a nuclear catastrophe (the personagans talk about “Big Glare,” “the sky opened up and the sun fell on the earth”, etc.).. Anyway, the origin of everything would have been a war of global proportions with religious motivations. Therefore, after the war, all copies of the Bible (and other religious books) were rounded up and burned, leaving an issue that is transported by Eli, inside your backpack.

This single copy is eagerly sought by Carnegie (Gary Oldman), a mixture of gangster and mayor who sees the Bible as a set of words with magical power persuasive enough to enlist the city in its favor, getting even more power to influence and control .

Eli (a clear allusion to the prophet Elijah in the Old Testament described as the champion of monotheism and model for asceticism and seclusion in the pursuit of touch with God through prayer) is lonely, driven by blind faith (a voice you would have revealed you should take your single edition of the bible somewhere to the west), monosyllabic and endowed with courage and skills of a martial artist.

So far the movie combines three effects of religion: first, it produced an apocalyptic world war because (the film suggests) fundamentalism and intolerance, and second, the religious discourse is presented as a potential propaganda tool that produces persuasion and, consequently, a kind of “social cement” that motivates people to a common goal, and third, the religion as a drive that produces moral and ethical values like asceticism, self-discipline and motivation from a blind faith that leads to sublimation of desires and individual needs in the name of a higher purpose.

Here the allusion to the prophet Elijah is deliberate. The monastic movement of the century IV took Elijah as his model, a strong emphasis on continence, poverty, life in the wilderness, fasting, his prayer. Eli, the protagonist in the film, goes against a strain of silent protagonists, idealistic and ascetics, from Clint Eastwood at Mad Max.

“New Fathers”
The film’s screenwriter, Gary Whitt, originates in the game universe as a journalist and writer of games like “Pray”, “War” and so on. It is interesting to note the influence on the script of the Book of Eli not only the language of the universe of games, but even what we may call a new asceticism of a new class that deals with new technologies. The Canadian researcher Arthur Kroker talked about the emergence of “new priests”, members of the new virtual class that have a self-image as a mystic and messianic harbingers of a promised land: the digital paradise. Mission that requires renunciation and asceticism: isolation, renunciation of worldly pleasures and physiological needs (sleep and sex), but different from fasting, a diet junk on coffee, cigarettes and slices of pizza in endless sessions in front of computer screens .

The pastiche that Eli is the protagonist (a mixture of characteristic “of the heroes of Western heroes in movies like Kung Fu with David Carradine of the 70 – and pacifist fighter) is a projection of that self-image of the” new fathers “of the digital age.

This neoconservative ideology on religion will be realized in his own narrative structure, and conventional hoolywoodiana: breakdown of order and return to order. The film starts showing sequences of lawlessness, chaos and disorder (gangs of cannibals, attempted rape, robbery, looting), all caused by religion who played in the post-apocalypse world. Eli should carry the book that produced the apocalypse (the Bible) to a safe place in the West. It should keep you away from people who just like Carnegie would repeat the awful addicted past.

At the end we have to restore order, although Carnegie can steal the Bible of Eli having been devoted to reading the Bible for years, managed to memorize it word for word. Arriving in San Francisco in ruins and you go to Alcatraz Island is received by members of an initiative that seeks to unite all the artistic legacy of humanity in a kind of museum. Eli begins to dictate the entire contents of the Bible is that manuscript to be subsequently printed a new edition.

The new version of the Bible is then placed on a shelf, comfortably alongside Thora, Quoran, Bhagavad Vita etc. It is the restoration of order. The ending is both ironic and symbolic: the museum where all cultural and artistic heritage of humanity is gathered is at Alcatraz Island, the legendary prison off (ironically many blogs say the movie should be called “Escape to Alcatraz”).

This is the fate of conservative religion and the Sacred: as a book resting on a shelf in front of the disinterested gaze which borders the sacred or the mere aesthetic dilettantism. Herbert Marcuse once called this “repressive tolerance”: under the guise of a liberal system that allows all ideologies and religions are published, released or exposed, everything comes down to simple binary oppositions, reducing them to “looks disinterested”or “point of views”.

Of religion, only one thing will remain: the ethics of martial self-discipline, asceticism and renunciation: Eli makes a disciple, Solara (Mila Kunis), who, in military attire, backpack and a shotgun in rayban making it the envy of Rambo, off the island of Alcatraz in a spirit of vengeance, thinking about returning to the city of villain Carnaggie and do justice.

In other words, The Book of Eli, in line with the neoconservative ideology after September 11, focuses on religion in the aspect of the repression of the individual before the divine missions high. Religion is contained in the Great Books of Alcatraz (after all, caused great misfortunes in the past), neutralized the power of the Holy (turns another book stocked), leaving only its power to cancel any free will or desire on behalf of an individual moral martial ethics and necessary in a world of struggle against the “axis of evil.”