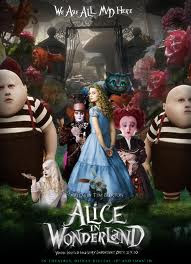 The version of Alice in Wonderland by Tim Burton has the clear moral and ideological framework of Disney: it reduces the whole complexity occult and gnostic (transcendent) of the book by Lewis Carroll a psychological journey of Alice in his memoirs where only the demand reconciliation with the order of this world: to seek self-knowledge and self-confidence that will help transform it into a entrepreneurial businesswoman.

Published in 1865 by Lewis Carroll, more than a statement of alleged love the little girl Alice Liddell (then 10 years old), the book Alice in Wonderland Wonderland is an episodic narrative, full of symbolism theosophical, occult and Gnostic (as we saw in previous post – see links below). Alice is a protagonist who does not fit the company belongs. A story with dialogue full of puzzles and language games leading to logic, physics and mathematics to extremes, to the point where all rationality achieves the opposite: the surreal, nonsense and anarchy.
A character so screwed up as Alice would be perfect for director Tim Burton, a filmmaker who often faces fantasy universes and cumbersome and complex narratives with progress.
Despite this seemingly perfect marriage, the filmmaker’s version emerges with a conventional narrative that reduces the complexity and ambiguity of the text original.
Tim Burton’s adaptation to the saga of Lewis Carroll’s Alice behind two novelties: first, he merges elements of two books “Alice in Wonderland “and” Alice Through the Looking Glass. ” The second novelty, the principal is Alice found that a fully grown and about to be married by the imposition Lord family with a son of his partner’s father (deceased). Not to give “Yes” at a party organized by the families to be purposefully announced their engagement, Alice ran off by the huge gardens of a mansion, to find a strange rabbit vest and watch. Pursue him to enter a hole that reveals the entrance to a strange underworld.
The characters and the overall structure of the narrative documents are maintained by Tim Burton. However, it is the subtle changes and adjustments that shows that the director (Author of radical films like Swenney Todd) had to bow to the Studios Disney and synchronize Alice’s narrative as to what are called “agenda tecnognóstica “(see links below). No wonder that many critics have noted a Tim Burton’s “lazy” with a conventional narrative.
The first thing that stands out is the strategy of breaking-the-order- return-to-order narrative. In the original literary version, the misfit Alice plunges into a vibrant metaphor for the lack of meaning behind rationality of the adult world and the story ends ambiguously and challenging the reality principle: the end of “Alice Through the Looking Glass” the protagonist does not know if it was all a dream or if it was part of the dream Red King (Gnostic suspicion that reality could be a fiction produced by a God who does not love us (the Demiurge).
In this version, instead, that ambiguity is removed: breaks the order Alice (marriage imposed by the conventions of society) runs throughout the course of a dream “movie dream” and, after the final battle with the dragon Jabberwocky returns to the society to assume a new role: not as clueless now as a member of the firm who would be his future father in law. Alice returns to his responsibilities. All your adventure through Wonderland served as a motivational self to believe in themselves and ultimately take over his father’s business.
More than an authorial work of filmmaker Tim Burton’s “Alice in Wonderland” is a product of Walt Disney Studios with its traditional framework for morality current running through all their products: cultured entrepreneurship, motivation, self-confidence and a constellation concepts associated with corporate imagery and literature of self-help.
This is symptomatic when, in the final sequences, Alice comes to his senses and realizes that everything she is going through this subterranean world is not a dream, but memories. During her childhood she attended the universe that often grow up into oblivion by rationality and conventions of the adult world. If the original version of Carroll’s Wonderland is the very real world of Alice in inverted form, paradoxical and metaphorical, here in the version of Burton/Disney is a journey of self-knowledge.
Alice in tune with Techgnostic Agenda
Here, the film syncs with the “Techgnostic Agenda” in effect in productions that converge primarily to fictional genres such as fantasy, sci-fi and suspense. 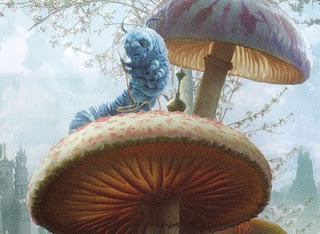 As we saw earlier, the recurrence of this agenda is present at the beginning of this century from movies like Vanilla Sky to the recent “Inception” (2010). They are films whose scripts and arguments are influenced by the “technologies of the mind” (neurosciences, cognitive sciences, etc. Memetics.) Tools to attract keen interest from the entire complex corporate-media-advertising: a project that aims to map ( like in the movie “Vanilla Sky” where the archetypal imagery of the protagonist’s life are the raw material for the manufacture of “lucid dreaming” imprisons him that), one cartography (as in “Eternal Sunshine of the Spotless Mind” – 2004 – where the technology of memory erasure produces a labyrinthine vision of the mind and departmentalized with local street corners, cross roads etc..) and a topography (the different levels of dreams as in the “Inception”). Objective: To create three-dimensional models of the dynamism of the mind to enter no more ideas (slogans, ideologies or discourses – that ultimately result in a slight effect), but “memes” that would later be transformed into ideas.
The whole saga of Alice, his characters, the geography and topography of Wonderland, the “Oracle” (a temporal map of all past and future events) presented by the caterpillar to Alice blue smoke narguillé, becomes, in this new version, in an inner journey to overcome the constraints that block the potential for Alice. Just like the movie “The Source” where the image of Cobb’s wife (Leonardo DiCaprio) is a projection of his guilt, “Alice in Wonderland” all the characters would be projections of several “Alices” interior and in the end Jabberwocky dragon would be the projection of its fears and ghosts. Alice cuts off the dragon’s head, get confidence and takes the company’s late father.
All riddles, puzzles and paradoxes with which Alice was confronted in the version of Lewis Carroll, this reduces to just one question: is it the real Alice? Sure, she became an adult, let the playful innocence of childhood and the mindset. The inhabitants of Wonderland can not therefore recognize it. Your challenge is to reconnect with that lost Alice. Therefore, dialogue is Alice solipsist, ie there is nothing more than his own experience. All the fantastic characters of the underworld would be nothing more than projections of the “Alice” intimate interiors in a battle of self. Alice does not pass “Through the Looking Glass.” It reflects on him. There is a transcendent experience, but only immanence: Wonderland as a rite of passage for future responsibilities as adults.
The deep symbolism of Alice, associated with the archetype of the Gnostic Sophia, filtered and translated into the postmodern heroin entrepreneurial. If Alice, as Sophia, depart for foreign lands that make little sense in pursuit of new lessons in the current version of Alice is a solipsistic journey of no transcendence but the peaceful acceptance of reality (the Mad Hatter in the film – Johnny Depp – calls Alice in Wonderland to stay. In response, Alice speaks of his obligations and things to do, refusing the invitation.)
Version Burton/Disney reduces the complexity occult and gnostic (transcendent) of the original version of Lewis Carroll in an inner journey that only seek reconciliation with the order of this world: seeking energies that motivate us to move forward on our obligations and duties .