In a lecture given at the World Future Society in Boston last month, NASA’s chief scientist Dennis Bushnell introduced the new look for Tecnognose: environmentally friendly concern for global warming and climate change. Dispatch the man to virtual worlds to leave the planet in peace, through AI, nano and biotechnology, is his proposal. Hollywood seems to reflect the technological agenda in telling stories of technology to scan and map the dreams, memory and the human psyche.

Professions away from “boring” as “bank tellers, gas station attendants, education, pilots, soldiers, human beings occupy their leisure time inhabiting virtual worlds three-dimensional simulation, for example,” the experience of sitting in a tropical beach. ” More than that, the planet would get rid of economic action and political human historically harmful to the environment by simply transferring the humanity into the virtual world of electronic networks connected to the neuron.

An imaginary Techgnostic with a dangerous mixture of eugenics, transcendentalist mysticism and neo-Malthusianism.
Dennis Bushnell is a scientist focused on the need to combat climate change and development of renewable resources. For him, the only solution is to remove the human being with “their bodies with water” of economic activities, substituting for robotics, automation and nano implants in the human brain. The entire educational system would be replaced by software downloads directly to the brain. Biotechnology replacing the “boring” learning activity.
This aversion of Kabbalistic Gnosticism by the body (bodies of water “in the words of Bushnell) and matter is the imaginary mystic behind that speech technology. Bushnell, therefore, population control advocates, the demise of the “subclass” in the U.S. and, implicitly, the political dominance of a technological elite clarified (people like him) that commands the entire process.
As seen in previous posts (see links below), the Tecnognose is the conjunction between Gnosticism and Science, an affinity between gnosis, technoscience and cyberculture. The elimination of body and of subjectivity enabled by virtualization technologies computing seems to favor this kind of “religion of technology”. Due to certain social and cultural circumstances of the twentieth century, a type of Gnosticism (the kabbalistic) became the true technological vision that redirected the history of technology, making them join the current stage of the prostheses and simulations.
Simulations are the answers to unemployment, mass produced by robotics and automation: Bushnell imagines unemployed away from the real world, living in virtual tropical beaches. This idea seems to be the applicant’s future that permeates NASA. Another scientist from the institution, Robert Jawstron once envisioned a future dominated by the “disembodied intelligence”

One day a scientist will be able to remove the contents of your mind and transfer it to your computer’s memory. Because the mind is the essence of being, we can say that such a computer scientist came in and started to inhabit it. At least we can say that from the moment that the human brain inhabits a computer he is released from the weakness of mortal flesh … He is in control of their own destiny. The machine is your body, it is the mind of the machine … This seems to me the most intelligent and mature life in the universe. Resize silicon plates and no longer limited by the duration of life inside the deadly cycle of a biological organism. This kind of being will live forever. “(Robert Jastrow, The Enchanted Loom: Mind in the Universe, New York, Simon and Schuster, 1984, pp. 166-67).

… And why not?
What’s wrong with abandon activities grueling and boring day to day and through bioinformatics, connect your brain to a virtual world and live in paradise beaches simulated? 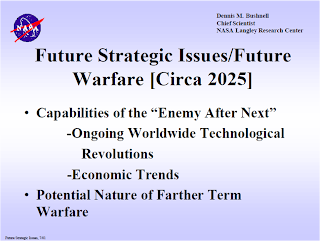 First, the eugenic ideology evident in the discourse of Bushnell. He refers to the planet as “spaceship earth”, the crew lost control manual and grows at a rate of 2 million people each week, “engaging in bloody battles in the corners of the spacecraft.” Therefore, only an enlightened elite can control the technological process of saving the planet’s ecological simply eliminating the human social life and economical to ship them to the virtual world of the silicon wafer. Under the command of the elite intellectually superior commanding lifeless bodies which I circulated in cyberspace.
Under an environmentally responsible clothing, repeats the ideology that the Nazis once tried to put into practice, only that this time, with the bio-computer technology and genetic engineering available.
Second, the question of hipertelia technology. We saw in previous post that all technological systems tend to a state of generalized obesity that undermines the original purpose. The obsession of technology in expanding access to features and uses more precise, effective and high performance is due, ironically, in the absolute uselessness. Reaching the latest interface technology history (biology and electronics, neural network / electronic network) virtualize not just havens of dreams but also the nightmares. If our psyche has instances of repression of unconscious nightmares, the same can not say in relation to electronic networks.
Movies like Vanilla Sky (2001) thematicized this reversal where technological narrates in an ironic way the irruption of the unconscious in the “lucid dreams” of the protagonist kept in cryogenic state by a company.
The lights produce science and knowledge, but light also produces shadows.
Hollywood and Techgnostic Agenda
The Matrix (1999) was the culmination of the “pop gnosticism.” Strongly attuned to the euphoria of the twentieth century computer technology (Internet, virtual reality, etc.). We have movies Gnostics that period (1995-1999) narratives that envision a world simulated by powerful technologies omnipresent and omniscient, able to create a counterfeit of reality so perfect that is indistinguishable from the original, at least for the perception of the protagonists. We have the classical Gnostic narrative of a world created by a Demiurge (the technology) to trap human beings.
From the year 2000 we have the introjection of tecnognose within the human mind, memory and dreams. Eternal Sunshine of the Spotless Mind (the Eternal Sunshine of the Spotless Mind, 2004), Vanilla Sky, The Way (Stay, 2005) The Origin and Current (Inception, 2010) show future technologies (future or not so well) that make a topographic mapping of our memories and dreams.
When we take the futuristic predictions of Bushnell 2025 that the environmental and climate problems of “spaceship Earth” will be solved by mankind to migrate virtual tropical paradise, it seems to make sense of the convergence of all efforts in neuroscience, neuromarketing and research in AI. This set seems to be part of a technological agenda reflected in current movies Gnostics: scan, map and peering through bio-electronic interfaces for the dynamic operation of the psyche, dreams and memories in the future, play them virtually.
Chief scientist for NASA’s Dennis Bushnell, this will be our last home. But along with the dreams, also virtualize our nightmares.
See the presentation slides Dennis Bushnell: Future Issues Strategic / Future Warfare [Circa 2025]
Related Posts: